Looking for gifts for your Morbid Inamorata?

Then turn the traditional Valentine’s gift list on its head with these sex and death inspired offerings. (I’m UK based and have trawled the net for UK sales sites – my guess is those in the US will find a lot of this more easily!) 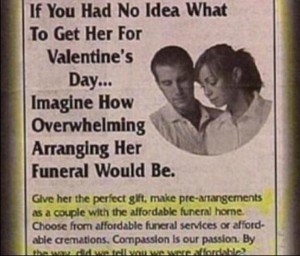 1) Perfume: Put down that bottle of ‘Prada’ Candy and go for something slightly more unique with one of these death themed scents. Perfumes have existed practically as long as man but the practice of giving it as a gift has become slightly cliched. Considering essential oils and resins like Frankincense and Cassia were originally used by the Egyptians as part of the embalming process, it wouldn’t be that unusual to choose something more death-themed this year, such as Death & Decay (Lush/ Gorilla Perfumes), Dead Sexy (Tokyo Milk), Funeral Home (Demeter) and Cemetery (Akima Botanicals).

2) Flowers: Another traditional romantic gift and still a classic – I mean who doesn’t like red roses? However I do prefer mine in a mixed bouquet with white lilies. Red and white bouquets, I’ve mentioned before, have been said to symbolise ‘blood and bandages’ and many nurses still ban them from hospital wards as they’re considered bad luck. Lillies, of course, are synonymous with death. However, if you want to go even further along the death route then pick one of these carrion flowers which smell like decomposing flesh…she certainly won’t forget that! Read my blog post Carrion Gardening for info on 10 different carrion flowers and beware, these things are very sought after so do check these recommended buyers thoroughly.

If you’re dating a serious goth then perhaps anything alive is just not the way forward for you. If that’s the case, seek out one of many companies which deliver flowers that are already dead, like Bluelips or The Payback. Or simply wait for a live bunch to die before gifting them.

3) Jewellery: This too could easily also turn into a cliche if it wasn’t for the plethora of aberrant adornment out there. Van der Glas make rings that you can get your teeth into, literally, as do Bone Lust on Etsy (and yes, that does mean with your teeth. There is no better way to say “I Love You” than by ripping out a useful appendage and presenting it as a necklace). If that’s a little too real then Kivaford create the cutest tiny anatomical hearts and skulls in glass bell jars that would be perfect for Barbie’s Anatomy Lab (which I really think should be a thing) but you can order them on a chain if you wish. If it’s engagement rings you’re looking for then Until Death Inc win, hands down, with these beautiful and sophisticated memento mori style skull rings (with all sorts of coloured stones) but I also love these coffin gems, from Mordaunte, which can be made into engagement rings.

This box of chocolates from Vegan Treats in the US is called Fatally Yours and it’s “to die for” – limited edition.

Finally, there is absolutely no-one out there better than Stephen J. Shanabrook when it comes to disconcerting death-themed chocolates. The below are part of his ‘Morgue’ chocolates series: casts taken of wounds and physical features of the deceased, then made into chocolate. Incredibly powerful but unfortunately (or fortunately?) inedible. 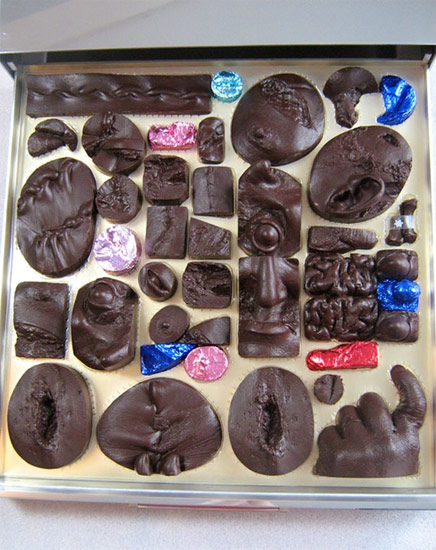 5) Cosy night in with a DVD: If it’s a cosy night in you’re after (and it probably is the best option at this time of year, when restaurants are overpriced and overbooked) then watch a ‘dead sexy’ film. I recently reviewed Life After Beth which I highly recommend (as well as showed a few others in my collection.) To expand on the RomZomCom theme a bit more, how about commissioning Rob Sacchetto to create a zombie couples portrait of you and your beloved?

It may be going a little bit far to cook and eat brains for your romantic zombie evening, although me and my other half actually ate stuffed hearts last year. A nice half measure is heart shaped steak! You can get them in the UK from Tilia or Elite Meats

6) Something SEXY: For those who are genuinely into 50 Shades of Grey (like, pallor mortis grey) I’m just going to leave these here: 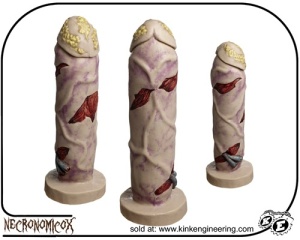 But this is the pièce de résistance…The Vamp or Twilight Dildo from Tantus Direct was marketed during Twilight mania and is a very pale pink, inlaid with glitter to emulate the stiff of a particular stiff. It wasn’t only described as having a “deathly pale flesh tone reminiscent of the moon’s soft glow” but it was also marketed as being able to “retain hot and cold temperature” basically informing the ‘user’ it can be cooled down to vampire temperature for an authentic experience. Unfortunately (is that the right word?) it’s not on sale now but I just had to add it to this sex/death list. 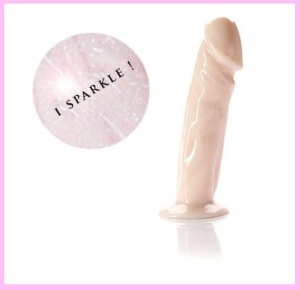 So there you have it – I hope you enjoyed that whistle-stop tour through a list of alternative Valentine’s gifts and whatever you do on Valentines Day (and I do mean whatever), I hope you enjoy it!