If you’re looking to get cosy with your other half, a bottle of wine and a romantic movie this Valentine’s Day then I have a few recommendations. However, this is a blog about sex and death so most of the films have a ‘dead sexy’ theme…. Read on for the newly released Life After Beth and a few other ideas.

I was lucky enough to get a copy of Life After Beth before its DVD release date in the UK (on February 2nd.) This makes it an ideal time for a Valentine’s date and as it’s a new release I’ll mainly focus on this one:

A couple of days after Beth’s funeral her grieving boyfriend finds her alive and back at home (no explanation as to why) and enjoys a successful, but short-lived, second chance at their relationship before things go a little…awry. I don’t want to give too much away but I was really pleasantly surprised by the film. After the popularity of titles like Warm Bodies I was expecting this to be your typical polished teen movie but it isn’t: it’s a slick indie offering with some great special effects and make-up (some realistic hypostasis/livor mortis for example) with enough gruesome moments to make it a horror, but not so many they’re used to disguise a lack of real substance.

The addition of Smooth Jazz to the story had me (and my long-suffering boyfriend) in absolute hysterics, as did the – shall we say ‘volatile’ – nature of Beth’s personality. When it comes to music I’m into most things which are hard and heavy but there are many times when only smooth jazz will do. I listen to it constantly at work, for example, when I need to feel very relaxed and keep my hand steady – I can’t carry out delicate preservation work on 19th Century testicles when I have high blood pressure. They say music soothes the savage beast and it also apparently soothes zombies and blondes with an anger problem…. Similarly any woman who has had PMT or any man who has experienced a woman with it will find a lot of this metaphorically relatable. It’s an intelligent film with echoes of Evil Dead (always a good thing) and the cast are great – particularly the addition of Anna Kendrick who is likeable and dry in everything. Have a look at this trailer:

I can’t recommend this film more! You can pre-order/buy a copy in the UK on Amazon but my guess is that just before Valentine’s Day it will be pretty much everywhere for you to pick up, and you really should.

If you’re looking for oldies but goodies then I have a staple list of films that I own for just this time of year, all horror of course. “Why horror?” you ask. Well, not only because I like horror but because it’s more appropriate! St Valentine’s Day has a dark history: there were several St Valentines, all of whom were martyred and most likely by beheading, and I wrote an article about how Valentine’s Day is like the new Halloween for this and other reasons. As far as I’m concerned romantic movies just don’t cut it. Plus, it’s been theorised that watching a scary movie ups the ol’ libido which is pretty much what you want if you’re spending it with your other half… Here’s my collection and I’ll simply link each title to IMDb so you can check them out. I hope they inspire, and happy viewing! 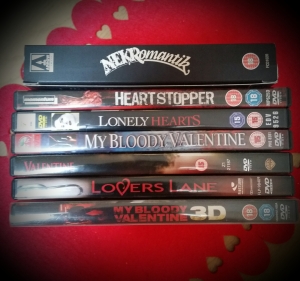