Over the last couple of years I’ve been in the enviable position of working with The Wellcome Collection on their fantastic Forensics: Anatomy of Crime exhibition, even recently representing it in printed media and on live TV. The exhibition, and the ad hoc spots chatting about it, were a real honour for me, having spent all of my career working in forensics and with the dead. Now that I’m attempting to go deeper into the study of our relationships with the deceased and how they affect us positively, I’m thrilled to see the inclusion of The Death of a Noble Lady and the Decay of her Body from The Wellcome Library in the exhibition. I’ve wanted to take a closer look at this fascinating series for a while as it encompasses sex and death, as well as representing a way for us to familiarise ourselves with our inevitable decay.

The Death of a Noble Lady… is similar to a series called Body of a Courtesan in Nine Stages of Decomposition, c. 1870. by Kobayashi Eitaku – both examples of the Japanese art of kusôzu (images specifically portraying the nine stages of decay. There is also corresponding poetry: kusôkanshi).  The painted images, portraying the bodies of decaying courtesans or noblewomen, were created from 13th to 19th century in Japan.  Body of a Courtesan… is ordinarily exhibited at The British Museum. You can see pictures of all stages of decomposition as well as the curator’s note on their website and, if you’re interested, all nine stages are (loosely): recent death, bloating, rupture, putrefaction, consumption by animals, discolouration, dissolution of the flesh, fragmentation of the bones, and complete disintegration. But why, you ask, do I want to see beautiful ladies decomposing and learn all the stages?? Here’s why.

In the Buddhist faith, contemplation of death is known as Maranasati and involves the ‘Nine Cemetery Contemplations’. It is an integral part of meditation. It’s listed in the Satipatthana Sutta (the guidelines for establishing mindfulness) as the concept ‘I am subject to death, have not gone beyond death’ and according to Ajahn Jagaro this type of contemplation has three benefits:

It can be split into two threads, the first contemplating our impermanence in order to really appreciate the life we have and the second, a rehearsal – a run through of death as a process – to familiarise ourselves with it and thus cease to fear it. Kusôzu makes up part of this second thread, which should also include attending a cemetery or burial ground to contemplate the topic of death. (I have been asked to allow Buddhist Monks into the pathology museum I run, for this particular purpose and there are some websites dedicated to this type of meditation although some people, particularly in the West, may consider images from them particularly graphic.)

So what does this have to do with us?

Around this time last year I was thrilled to see the fruits of my labours ripen in the form of The Death Salon UK – organised alongside Caitlin Doughty, Megan Rosenbloom and Lindsey Fitzharris. I chose to open this three day ‘death extravaganza’ with Dr Nathan Hefflick, from the University of Kent, as he had researched the effects of contemplating death on people’s mood, similar to the Buddhist recommendation. His findings indicated it had a positive effect hence I wanted to start the conference on an optimistic note. His 2009 study summarised that thinking about death for five minutes a day reduced depressive thoughts after only one week. A separate study found that students who were asked to write about their own death showed more positive emotions than those asked to consider the much less ‘fatal’ prospect of dental pain. In a similar study for the Association for Psychological Science, findings could be summed up as “When people think about death abstractly, they may be more likely to fear it, while thinking specifically about their own death enables people to integrate the idea of it into their lives more fully”. The studies have even given rise to Living Funeral Therapy, popular in Korea in which people attend their own funerals as a form of treatment for depression. Large corporate firms are even sending their employees on seminars such as Beautiful Life in order to help them experience their own deaths to live more fulfilling lives and perhaps ease the high suicide rate.

I blog about sex and death, a sneaky way to ensnare people into my world of understanding the importance of intimacy with human remains and mortality, but it’s not always as titillating it seems (although it certainly can be!) The iconic memento mori/vanitas ‘Death & the Maiden’ image, for example, is frequently discussed because death is always portrayed with a maiden and she is usually naked (see here for a recent post on deadmaidens.com). Is it sexism? Is it misplaced lust? Well, like the women depicted in the kusôzu, it’s probably a mixture of a gendered gaze as well as the fact that the female represents ‘life’ and is a better juxtaposition with ‘death’ than the male figure. Over the 600 years they were created, the decomposing corpse images were all women. Some scholars think this was to show that if a woman—one of the most impure and repugnant incarnations in the Buddhist cosmology—can become enlightened, so can anyone [1] Others think there is a sexual element or at least an attempt to beautify the topic, in a similar way that Anatomical Venuses with their pearl necklaces, pubic hair and ecstatic expressions made a dissected corpse more amenable to (male) medical students.

The curator’s notes for Body of a Courtesan… also suggest that because the series depicts a prostitute, it crosses over into another Japanese art: that of shunga or erotic drawing. Sex and death are frequent bedfellows and as transgressive as it may sound on the surface, it is a popular and enduring trope. Sometimes it’s a metaphor for everlasting love, other times it symbolises destruction. Frequently there is a paraphilic element to sex and death depictions, yet scholars such as PhD candidate Romany Reagan (who gave a sold-out talk on Death and Eroticism) will assert that depicting sex and death together is not necessarily necrophilia, it is actually life affirming.

From the pale and wan pre-Raphaelite heroines likes Elizabeth Siddal, to women in fashion shoots for brands like Prada and TV’s America’s Next Top Model (read more here) it’s clear that whatever the reason, when it comes to women, we still desire a little bit of decay.

A great post on Maranasati for the modern world http://awakeningbuddhistwomen.blogspot.co.uk/2013/09/maranasati-for-modern-world.html 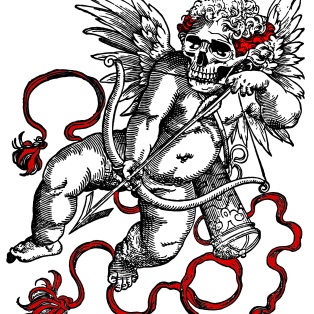