In 1846, Edgar Allen Poe wrote that ‘the death of a beautiful woman is, unquestionably, the most poetic topic in the world’ and in saying this he could perhaps have been predicting one of the most famous suicides ever known.

On the 1st May 1947, the below image was captured by photography student, Robert Wiles, four minutes after Evelyn McHale jumped from the observation deck of the Empire State Building. He was alerted to her death when he heard a huge crash – the sound of her body hitting a United Nations limousine – and saw the commotion of the other equally shocked onlookers. Within seconds he had taken this iconic photograph of the 23 year old as she reposed peacefully on a self-made bier of twisted metal and steel.

A whole page was dedicated to the image when it became ‘Picture of the week’ in an issue of LIFE magazine on May 12th  with the caption: “At the bottom of the Empire State Building the body of Evelyn McHale reposes calmly in grotesque bier, her falling body punched into the top of a car.” 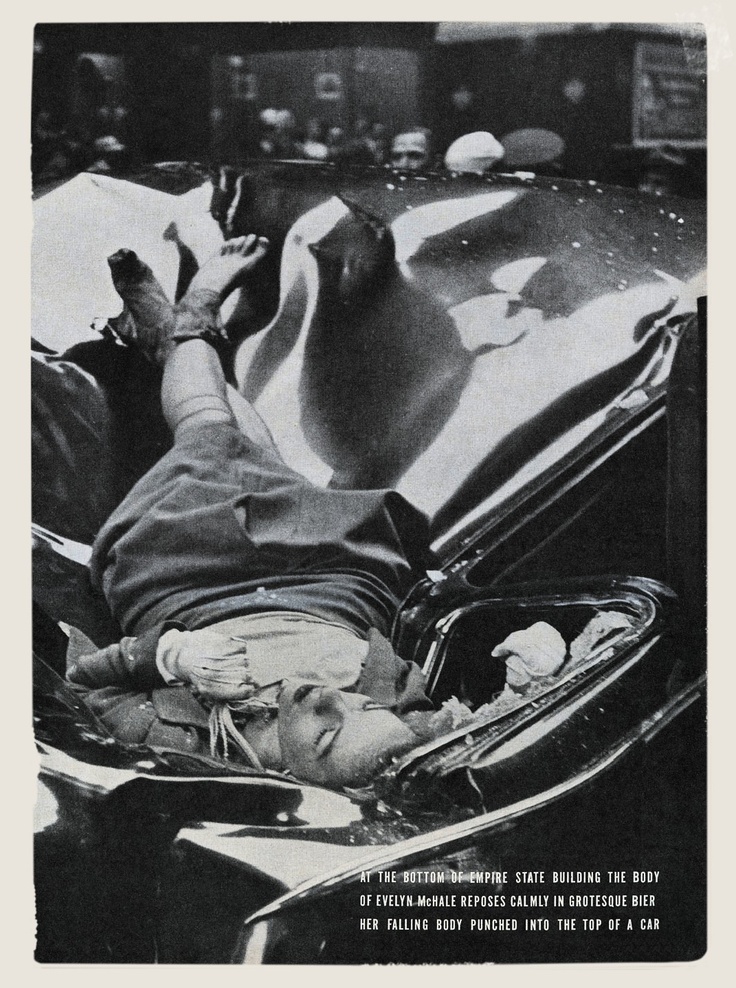 Nearly seventy years later it remains a haunting and affecting piece of photo-journalism. Andy Warhol used it in his art during the 1960s (see here) and the band Machines Of Loving Grace recreated it for their album 1995 GILT. Interestingly, however, it was the only one of Wiles’ pictures ever published.

Just what is it that makes this picture so utterly captivating? There is an obvious juxtaposition between the violence of the moment (manifested in the destruction of the car beneath her, and the shocked eyes of the spectators) and her seemingly peaceful repose. Her legs look delicately crossed, her dainty gloved fingers curl around her necklace and her face shows no sign of suffering – she could literally be sleeping. Yet small details, such as the stocking torn off her gently crossed leg, reveal a darker story. Although there isn’t much more of a story to tell. No-one really knows why she chose to end her life on that day.

Evelyn Francis McHale was born 20 Sept 1923 in Berkeley, California and was living in New York at the time of her death. She’d recently become engaged to Barry Rhodes, an ex-GI studying at a Pennsylvania college and they intended to marry in Troy, NY in June 1947. The website codex99 describes her last day:

‘On 30 Apr she visited her fiance in Easton, Pennsylvania, presumably to celebrate his 24th birthday and boarded a train back to NYC at 7 a.m., 1 May 1947. Barry stated to reporters that “When I kissed her goodbye she was happy and as normal as any girl about to be married.” Of course we’ll never know what went through Evelyn’s mind on the 66 minute train ride home. But after she arrived in New York she went to the Governor Clinton Hotel where she wrote a suicide note and shortly before 10:30 a.m. bought a ticket to the 86th floor observation deck of the Empire State Building.’

The suicide note, too was particularly poignant, with it’s crossed out lines and allusions to her mother (who had left the family when Evelyn was around 7 years old): “I don’t want anyone in or out of my family to see any part of me. Could you destroy my body by cremation? I beg of you and my family – don’t have any service for me or remembrance for me. Tell my father, I have too many of my mother’s tendencies.” It was found on the observation deck wall, along with her coat, a makeup compact and a handbag.

One can only assume she was perhaps suffering from a clinical depression or mental illness that her mother, too, had suffered – and it makes Evelyn’s death at such a young age just that bit more tragic.

Her apparent composure masked the reality of her death. One site says, “According to reports she essentially “fell apart” when they moved her body. Her insides were basically liquefied.” She was however, identified by her sister and cremated as she requested in her note. There is no grave.

For more information on the real story, take a look at Lauren Ann Rice’s blog as she is researching it thoroughly for an upcoming book and is the expert on the topic. My interest lies instead in the almost beatification of the dead female, and in fact one site describes Evelyn as lying “in a halo made of blood”. 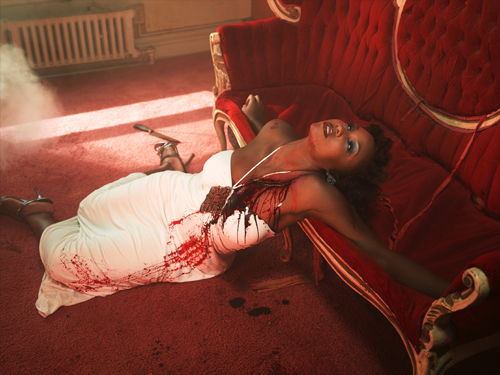 The beautiful corpse has been discussed on this blog previously in my posts on fashion shoots using models who appear dead (like the above which was for America’s Top Model. More info/pics here.) Yet I think many would agree Evelyn’s picture has more in common with the serene images of tragic Pre-Raphaelite women than any of these shoots. In these modern images the models look forced and uncomfortable, graceless and vapid. Perhaps photographers are chasing the ‘Evelyn Effect’ with no luck?

The beautiful but dead female is often used as a representation, a trope, of our own desire for death, projected onto the female ‘other’ whether Ophelia or Laura Palmer from Twin peaks. Elizabeth Bronfen says we are drawn to suicide and tragedy “…on the one hand we recognise that it is not so healthy in psychic terms. On the other hand we have an incredible desire for these stories. We somehow want these great feelings. The culture that produces no tragedies is a boring culture.”

The difference with the image of Evelyn is that she hasn’t been posed and she hasn’t been painted; she’s a spontaneous manifestation of this archetype which is perhaps why she speaks to our subconscious so successfully. For example, we can certainly appreciate the beauty of a Botticelli painting or a magnificent building – things which are man made – but we don’t feel the same sense of awe as we do when we witness an incredible sunset. It’s the impromptu and fleeting nature of the visual gift which makes it such a marvel. Evelyn McHale will go down in history as something akin to a fallen angel, as poignant and iconic as Marilyn Monroe or Elizabeth Short.