A History of Spousal Necrophilia

The notable phrase “Til death us do part” has dripped from impassioned lips during marriage vows since 1549, having been altered slightly from the earlier “Till death us depart.” The meaning is self-explanatory: “I will love you until we are parted by death.” However, this natural end to any marriage has recently been called into question by the alleged Egyptian law which would allow men to legally have sex with their deceased wives up to six hours after their death. This ‘farewell intercourse’ law proposal wasn’t actually true but the premise is nothing new. For example, a law in India stated that if a female died before marriage, her fiancé had to ‘deflower’ her before she could be cremated – and the ceremony had to take place in front of the village priest [1] In a similar vein, a salesman called Bradley from Utah met and fell in love with a woman in 1881. Unfortunately she had consumption and died before their wedding, but as an honourable man he kept his word (since he’d promised he wouldn’t let her go to the grave unwed) and married her at her funeral. Pall bearers rubbed shoulders with bridesmaids and wedding guests at this sad ceremony which was recounted in the Illustrated Police News: 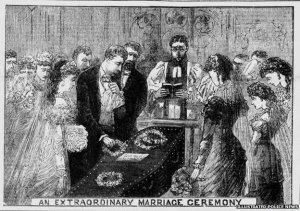 Anecdotes of spousal necrophilia have existed for thousands of years: The tyrant Periander of Corinth is said to have murdered his pregnant wife Melissa and had sex with her corpse in the 6th Century BC. The tale was told by Herodotus (who also told us of the wandering hands of the Egyptian embalmers) and gave rise to the necro-euphemistic phrase “Placing your loaves into a cold oven.” [2] Herod The Great, we are told, preserved the body of his deceased wife, the beautiful Mariamne, in honey for seven years in order to have intercourse with her after he’d had her killed. [3]

But stories regaled by ancient historians of men unable to say goodbye to their beautiful wives are open to interpretation – they can be symbolic acts, mere metaphors and analogies, or just interpreted incorrectly. More recent examples however display the very real phenomenon which can also be described as a Class II (Romantic) necrophilia.

Baronet Sir John Pryce (died 1761) is described as a well-known ‘eccentric’ who married three times. His last wife Eleanor Jones, the widow of Roger Jones of Buckland, had to insist upon the removal of not one but two embalmed corpses from Sir John’s bedroom before she agreed to marry him – they were the remains of his wives one and two, preserved and kept, one on each side of his bed.

And it’s not just men who may need to fill the void left by the death of a lover by preserving the corpse. Joanna of Castile (also known as “Joanna the Mad” or “Juana la Loca”) was the older sister of Catherine of Aragon. She refused to abandon the corpse of her husband Philip the Handsome when he died of typhus at the young age of 28 in 1506. She kept his casket close to her, embracing his corpse at night, and made her servants treat him as though he were still alive.

However, in some instances the whole male corpse may be too much of a logistical nightmare for a female and instead she focuses on the husband’s easier to manage (and presumably most potent) organ: the penis. Both Martin Schurig and Havelock Ellis describe cases like this. Schurig recounts the tale of a Belgian lady who secretly cut off the penis of her deceased husband and treasured it as a relic in a silver case [4] and Ellis tells of a French woman who embalmed and perfumed her dead husband’s penis and kept that in a case made of gold. [5] Elizabeth ‘Bess’ Raleigh (wife of Sir Walter) was presented with his embalmed head after he was executed in 1618. She kept it with her, ‘Isabella’ style, in a velvet bag until her death 29 years later when it was finally reunited with his body. In a similar fashion Mary Shelley received the heart of her dead husband Percy Bysse Shelley after he drowned in Italy. He was cremated on the beach when his bodies washed up on the shore, but a friend noticed the heart wasn’t burning well. He snatched it up and gave it to Mary who kept for the rest of her life, wrapped in silk and one of the sheets of Adonais, a poem written by Percy about his friend Keats. 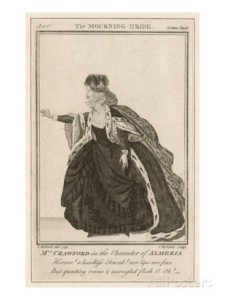 These examples of “Romantic necrophilia” are more understandable with married couples: it seems the one simply can’t bear the loss of the other, and the corpse serves to fill a psycho-sexual void. I’ve discussed the cases of Le Van (Vietnam, 2009) and Marcel H (Belgium, 2013) in a previous blog post. A similar living situation was discovered in 2009 in Pasadena: a female in her late 70s with dementia was living with the corpse of her husband who she had left lying on a sofa near the front door. The case of Mercedes Velarde from 2007  in Mexico City is slightly more unusual. She was keeping the corpse of her husband Edmuno in bed with her and her children knew about it and assisted her by helping to remove insects as he decomposed. In many instances the live spouse refuses to even acknowledge the death and this is illustrated by this most recent case in Indiana where the corpse of Gerald Francis Gavan was discovered only last month and reported in the news a couple of days ago.

These instances which illustrate the old adage “Love Never Dies” are very different to dentist Martin van Butchell’s decision to have his wife Mary embalmed and displayed in 1775. When Mary died he supposedly noticed a clause in their marriage certificate stating he’d still receive an income from her rich family as long as she was ‘above ground’ so he asked the eminent William Hunter to embalm her and he subsequently displayed her in a glass case at his home. Eventually Butchell’s new wife, Elizabeth, insisted he remove the cadaver because presumably, similar to Sir John Pryce’s wife, she didn’t want to share her man with another woman, alive or dead. The body of Mary ended up at the Royal College of Surgeons (of England) until it was bombed by the Germans in 1941.

But why are there instances where the marriage bed becomes the casket? We’ve seen that it can be undying love but Van Butchell illustrates that the motivation behind this type of necrophilia isn’t always positive. Perhaps it’s just an extension of the objectification of the woman as ‘wife’ which remains from a more patriarchal society: the idea that once betrothed the woman is a possession even, in fact maybe more so, in death. In it’s most violent form that can be seen in the Indian practice of suttee.

Very recent cases of overt spousal necrophilia have been more of a ‘possessing’ nature and include that of Craig Bidgway in Cardiff, 2007, who strangled his adulterous wife then had sex with her corpse. He then attempted to suffocate his young son. Also a 24 year old female was stabbed 61 times by her common-law husband in 1996 and he proceeded to violate her corpse while watching soft-core pornography [6] Both men state they never killed their spouses in order to have sex with them (as  homicidal or Class X necrophile might) but that they were ‘taking advantage of the situation’ and having one last hurrah as it were.

Whatever the motivation behind this type of attachment to a spouse, post mortem, it certainly makes you think twice about telling your partner you love them to death.